As the knowledge gets more and more advanced we find ourselves segmenting the branches of science into more specialized areas. This has lead to tunnel visioning of higher education. While this is not a bad thing, the consequences of it is when an intricate problem arises whose solution may be interdisciplinary, it remains unsolved or takes too long to be solved – primarily because specialist’s gap in knowledge of other areas. I am not trying to discount the profound knowledge of researchers and scientists but that their profundity has great depth but lacks necessary breadth.

While it is neither in the interest of science nor the scientist to restrict his depth of knowledge and concentrate on the breadth. Doing so will prevent us from discovering the hidden truths of universe, and most of the superficial knowledge have been discovered. Our best bet in further breakthrough is to go where no man has gone before. But looking only deep and not across fields may hinder our chances of finding solutions which aren’t necessarily profound but certainly cuts across disciplines. This presents us the conundrum, a trade-off if you will, depth vs breadth. In that regard I believe our concentration on depth has overshadowed potential areas of interdisciplinary research.

As rightly put by Karl Popper, our focus area should be in solving the problems rather than subject in themselves. This will lead us to both the required depth and the breadth. This is substantiated by Sir Andrew Wiles work on Fermat’s Last Theorem. Many eminent mathematics and other scholars had tried and failed at proving the infamous Fermat’s Last Theorem. (Excellent documentary on the problem and Wile’s approach towards it). His efforts were successful most importantly due to his focus on the problem and not the specific mathematics underlying the problem. This allowed him to borrow from different fields and works of different people. Who would have thought works in Modularity Theorem could lead to solving the longest unsolved problem of human history. 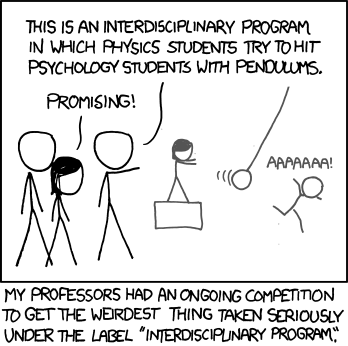 Medicine is a field, which I believe, needs more of interdisciplinary research than others. Not because researchers in Biology/Medicine are incompetent but because the problems in medicine are much more difficult than others. We cannot just test any medicine or make use of any crazy experiments we can think of (unlike say chemistry), there are issues of ethics and safety of human life. Also the more we understand Science of Life the more we realize how closely it is integrated to Nature and it’s underlying physics. I for one, wouldn’t be surprised if distributions of mutations were underlined by laws in statistical physics.

Not that no one is doing such research, certainly they are but with more funding, more vigor, more young minds who just doesn’t want to become a physicist or a biologist or a mathematician but an Inter-disciplinarian, a true polymath, we may find cure to cancer sooner or finally solve P vs NP or Protein Structure Prediction or any of the List of Unsolved Problems.